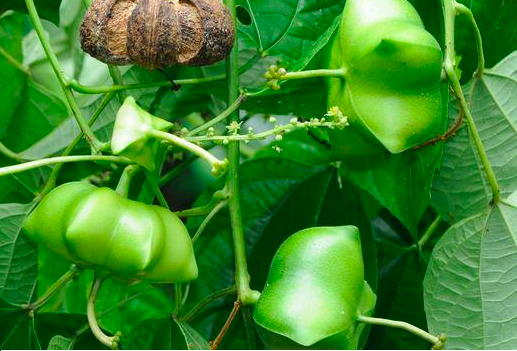 Sacha Inchi (Plukenetia volubilis L., Euphorbiaceae), which bears star-shaped fruit capsules, known as mountain peanut, Inca nut or Inca Inchi, is native to the Amazon region of South America, including parts of Peru and northwestern Brazil. Since its seeds contain rich nutritive materials such as edible oil (45% of dry weight), protein (27%), tocopherols (137 mg/100 g) and phytosterols (75 mg/100 g), Sacha Inchi seeds (and its derivatives) have been used in traditional cuisine for hundreds of years by indigenous people.

Importantly, most of the fatty acids from its seed oils are highly unsaturated, containing about 77.5–84.4% polyunsaturated fatty acids (PUFAs) and 8.4–13.2% monounsaturated fatty acids, while only a small proportion of its seed oil is saturated, comprising only 7.9–9.1%. Notably, in Sacha Inchi seed oils, there is an abundance of ω-3 α-Linolenic acid (ALA), accounting for about 46–50%, followed by the ω-6 linoleic acid (LA), accounting for about 33–36%. Studies have demonstrated that the proportion of ω-6 and ω-3 fatty acids in edible oils is critical in preparing functional foods to treat or prevent cardiometabolic disease, heart disease, hypertension and diabetes. The ratio of ω-6 to ω-3 fatty acids in Sacha Inchi seed oils ranges from 0.83 to1.09, which is considered to be an optimal proportion of functional oils for human health.

However, the physiological and molecular mechanism that underlie the accumulation of the high content of ALA in Sacha Inchi seeds largely remain uncertain. We have interests in dissecting the molecular mechanism behind ALA biosynthesis in Sacha Inchi seeds and identifying key genes responsible for controlling or regulating the biosynthesis of ALA would facilitate the use of genetic engineering in crop breeding to produce lipids with tailored fatty acid compositions as well as the provision of healthy functional oils.